(we won't use your email address for anything else)

The BP and Spar Store on the A19 has now reopened.

The Subway store will open next Wednesday (2nd September).

A celebration of our community

We hope Parishioners, representatives of all groups, organisations and businesses will come along and celebrate all that is good about our community and the many people who give their time and talents and enrich our lives.

There will be well known hymns and The Dean of York, Vivienne Faull will be our guest preacher.

Cake and fizz will be served after the service. We look forward to seeing you.

The 10k run took place on August 16th this year and was a great success with the maximum number of runners (600) entered and a lovely day. I’d like to thank our fantastic group of volunteers on the course, in the car parks and around the Village Green who really make the event – we have had terrific feedback from the runners on social media who appreciate the effort you make to make them feel welcome. We are very grateful to Charlie Forbes Adam for again allowing us to use the Estate grounds for our run and to Tom King of Queen Margaret’s School who let us turn their premises into a car park for the day! I’d also like to thank the Village Green Committee for their usual hard work in setting up the event and operating the very popular BBQ, and finally the 10k Committee who put 6 months effort into creating the most successful 10k ever – over £6000 has been raised this year towards new equipment for the Playing Fields Association, a record amount and a great achievement by all involved.

Next year’s run is planned for August 21st 2016 so make a date in your diaries!

York's top party band - HUGE - are back in Escrick!

This August, talented young guitarists from across the UK will be taking residence at Queen Margaret's School, York to rehearse together as the National Youth Guitar Ensemble (NYGE). Directed by Oxford based composer/guitarist Gerald Garcia, the NYGE will be preparing a colourful and enthralling programme of original works for guitar orchestra and chamber groups. 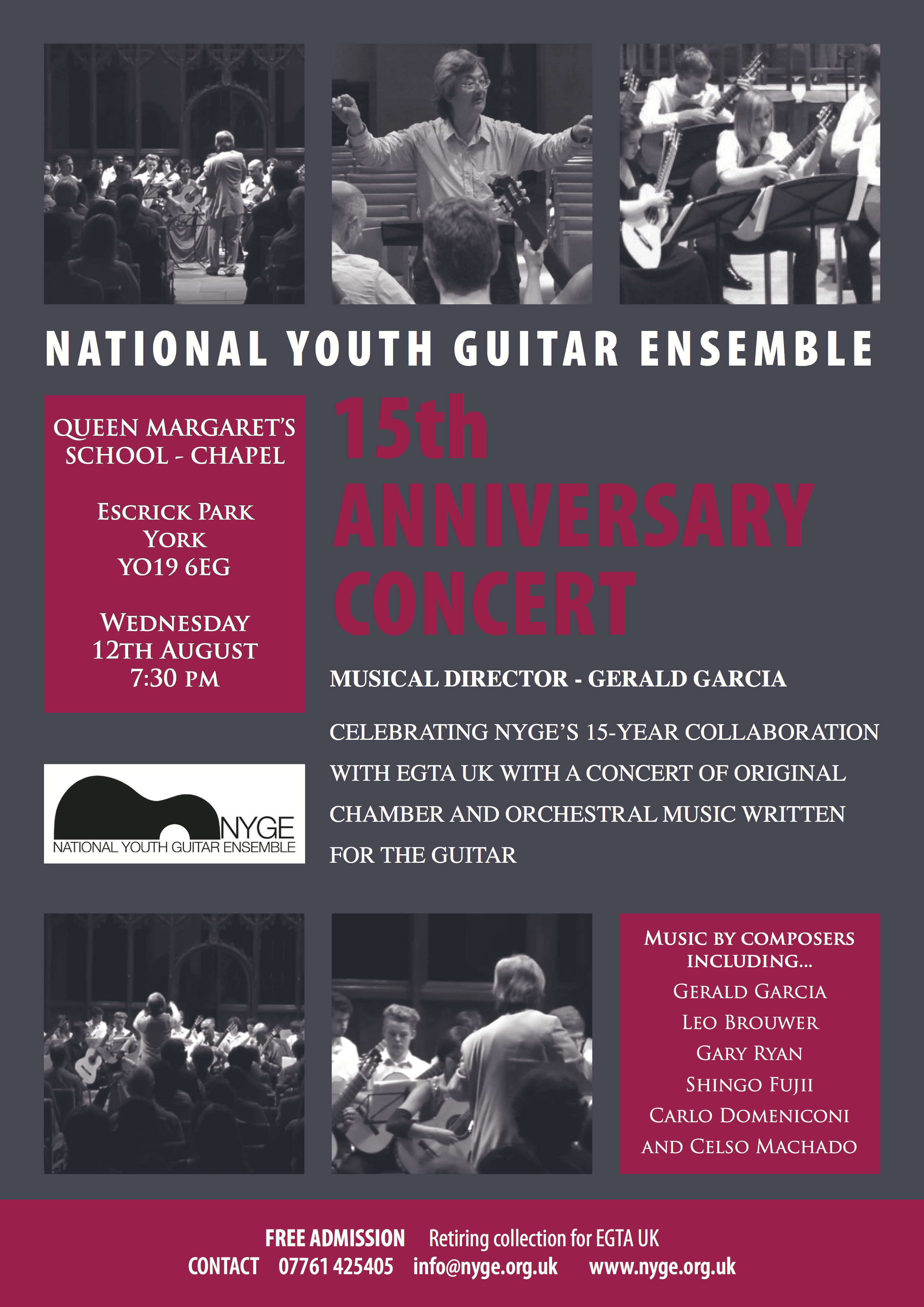 North Yorkshire County Council has opened the Selby bypass ahead of schedule this afternoon (Thursday) after completing a major reconstruction of the road from the A19 Greencore roundabout, Barlby to the A1041 Wishing Well roundabout.

The road is opening one day ahead of schedule after final issues with the Selby Swing Bridge deck resurfacing have been resolved.

Work has gone according to plan on the £2.4 million scheme which has involved deep repair and reinstatement of the carriageway, requiring a full closure of the bypass along this stretch.

The road was scheduled to be closed through to July 17th with the county council taking the opportunity to include the resurfacing of Selby Swing Bridge and some routine maintenance works such as grass cutting / tree trimming / drainage jetting and bridge inspections.

"We are delighted that this work has been undertaken in a thorough and a timely way and that the road is opening one day early", said County Councillor Don Mackenzie, North Yorkshire's Executive Member for Highways. "This has been a major reconstruction scheme which the county council took on board after it became obvious that surface failures of the bypass were deep-rooted.

From today, you’ve got another chance to influence where development takes place in the Selby District between now and 2027. That’s because the Selby District Council is encouraging dialogue on its proposed PLAN Selby documents which will guide decisions by them later in the planning process.

The final PLAN Selby will set out where new business and housing growth could be supported over the next decade and beyond.

These conversations on PLAN Selby are part of a long-running process to put in place a framework to support new business investment and to help deliver new homes.

Anyone will be able comment on and talk about the ‘work in progress’ on PLAN Selby using information on Selby District Council’s website from 29 June for six weeks – until 10 August. Around 1,000 organisations and individuals have been informed of this engagement process, including all those who responded to the initial PLAN Selby consultation including Parish Councils, local groups and infrastructure bodies such as those responsible for highways, water and education provision.

A cross section of community interest groups and business groups will be invited to discuss Selby, Sherburn in Elmet and Tadcaster’s growth and regeneration at workshops in the market towns. Local community representatives are also being invited to workshops to discuss village growth and conservation.

Deputy Leader of the Council, Cllr John Mackman, explained, “PLAN Selby will enable us to push ahead with our work to support new business and housing investment in the district. At this stage, we are focusing on engaging with community interest and business groups from across the District.

“Ultimately PLAN Selby will give us the framework to support the future development that our District needs - opening up new business space and a range of sites for new homes for family groups and individuals.

“We have a lot of good things going for us here in the Selby District, and we believe we offer a great place to do business and to live and enjoy life. PLAN Selby will help us continue this in the years to come.”

The discussions will cover issues such as how growth should be distributed around the District’s ‘Designated Service Villages’, how town centres should develop and Green Belt issues resolved.

Police are appealing for witnesses and information after a woman in her 90s was targeted by a distraction burglar at her home in Escrick.

At around 7.50pm on Saturday 20 June 2015, a young man called at the home of a 94-year-old woman in The Glade, Escrick. He engaged her in conversation and entered the house. While inside, he stole a black handbag containing bank cards and a mobile phone.

The suspect is described as white, 15 - 17 years old, between 5ft 3ins and 5ft 6ins tall, of slim build. He was clean shaven with a pale complexion and fair hair, wearing a cap and a grey or dark jacket.

Anyone with information that could assist the investigation should contact North Yorkshire Police on 101, select option 2, and ask for DC Peter Cooper or the York Investigation Hub. You can also email peter.cooper@northyorkshire.pnn.police.uk.

If you would prefer to remain anonymous, information can be passed to Crimestoppers on 0800 555 111.

Officers are urging members of the public to be vigilant and report any suspicious people or vehicles in their neighbourhood, particularly those calling at the homes of older people. Please also familiarize yourself with the crime prevention advice at www.northyorkshire.police.uk/boguscallers, and share those messages with friends, family and neighbours who may be vulnerable.

Here is an update on the progress on the work to resurface the Selby Bypass form Selby District Council.

The Annual Parish Meeting is an opportunity for parishioners on the Electoral Roll for Escrick to raise any matters of concern to them that relates to their local community.


This year's meeting will be held on Tuesday 26th May. Further details and agenda to follow.